Texas Tech knocks off No. 13 Tennessee in overtime 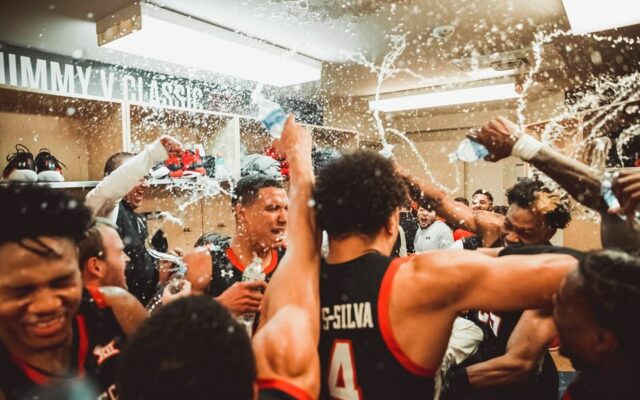 NEW YORK – Terrence Shannon, Jr. went for 18 points and a career-high 12 rebounds to help lead Texas Tech to a 57-52 overtime win over No. 13 Tennessee at the Jimmy V Classic on Tuesday at Madison Square Garden.

The Red Raiders (7-1) started overtime on a 6-0 run after regulation ended at 44-44 and closed out the win over the Volunteers (6-2) to secure their second straight victory at the Jimmy Classic after also knocking off No. 1 Louisville at the event in 2019 at MSG. Tech led 29-25 at halftime and limited Tennessee to just 26.8 percent shooting in the game, including seeing the Vols go 6-for-40 on 3-pointers.

The overtime win takes the program to 52-55 all-time in overtime games and snaps a seven-game losing streak in extra-session games. In overtime, Tech scored 13 points on 3-for-5 shooting after a second half where it scored just 15 points on 5 of 27 shooting.

A trio of Red Raiders finished with double-digit rebounds with Kevin McCullar finishing the game with 10 rebounds, five assists and eight points, while Daniel Batcho had a career-high 11 rebounds and added two blocks. A redshirt freshman from Paris, France, Batcho had a previous career-high of 10 rebounds in the 56-point win over Omaha and is now averaging 5.0 rebounds per game. He played a season-high 26 minutes and scored four points to go along with securing his 11 rebounds. Tech had a 57-52 rebounding advantage to overcome offensive struggles that saw it go 19-for-61 from the field (31.1 percent) and just 4-for-24 on 3-pointers. Kevin Obanor neared a double-double of his own with 10 points and seven rebounds, while Davion Warren scored 10 points and Bryson Williams had seven.

Shannon had 12 points and 12 rebounds in regulation before leading the Red Raiders with six points in overtime. It was his second career double-double after going for 23 points and 10 rebounds last season at LSU. Shannon, who has scored in double figures in all five games and matched his season-high with his 18 points, was 6 of 14 from the field and went 6 of 7 from the free-throw line. His 12 rebounds were one more than his previous career-high of 11 last season at Kansas.

“I feel like we did a good job of rebounding and eliminated their second-chance points,” Shannon said. “That helped us pull out the win. I feel like this puts us back on the right direction that we were going. We have to build on it though. We can’t get too high or too low with these games.”

John Fulkerson led Tennessee with 10 points and 10 rebounds, while Kennedy Chandler, Santiago Vescovi and Zakai Zeigler had nine points each. The Vols, who committed only nine turnovers but went 4 of 34 on 3-pointers in regulation, had a four-game winning streak end with the loss.

The win was the first overtime victory for Texas Tech since an 84-80 OT victory over Oklahoma State on Feb. 27, 2019 at the United Supermarkets Arena. The Red Raiders last overtime win over a ranked opponent saw them knock off No. 22 Nevada 82-76 on Dec. 5, 2017. Tech was 0-2 in overtime games last season with a pair of losses against Oklahoma State.

Tech improved to 2-0 all-time against Tennessee with the programs meeting for the first time since 1953… The Red Raiders are now 4-6 all-time at Madison Square Garden with two straight wins after a 70-57 victory in the 2019 Jimmy V Classic matchup against No. 1 Louisville.

“I’m proud of our effort and will to win,” Adams said. “I want to show my respect to coach (Rick) Barnes and Tennessee. They have a tremendous basketball program and are tough to beat. We talked about coming in here we would have to match their intensity and it turned into a slugfest with neither team being able to score. We have a lot of respect for Tennessee and think they made us better tonight. We were fortunate to come out on top.”

Tech went on a 6-0 run to start OT to take a 50-44… Shannon got Tech on the board for the first time in overtime with a runner at the shot-clock buzzer before a Warren dunk off a McCullar assist made it 48-44 with three minutes on the clock before another Shannon jumper… Fulkerson had a putback dunk for the Vols to stop the run
Tech took a 53-46 lead with a pair of Warren free throws before a Chandler 3-pointer for the Vols made it a 53-49 game with 33 seconds remaining
Second Half
McCullar hit a shot from the free-throw line on Tech’s opening possession of the second half for a 31-25 lead… It was his first basket of the game
Obanor pushed Tech’s lead to 34-25 with a 3-pointer two minutes into the half
Tennessee on a 6-0 run before a Batcho dunk to give Tech a 36-31 lead
Tech led 38-33 with 12 minutes to play in the game with McCullar hitting a layup before Zeigler cut it back to three with a layup for the Vols on the other end as the teams exchanged baskets for the second straight time
Williams gave Tech a 41-38 lead with a dunk with 3:38 remaining… Tech was 0-for-7 before the basket while Tennessee was 0-for-12 during the same stretch
Vescovi hit a 3-pointer to tie the game at 41 with 1:55 to play… Stopped an 0-for-14 shooting streak for the Volunteers
McCullar gave Tech a 43-41 lead with a pair of free throws with 1:26 remaining
Game went to overtime tied at 44 with James hitting a 3-pointer with 31 seconds remaining for Tennessee

Tennessee won the tip but didn’t score until hits fourth possession to take a 2-0 lead
Williams and Warren scored Tech’s first points on 3-pointers… Williams hit Tech’s first shot on the fifth possession of the game and Warren gave the Red Raiders a 6-4 lead with his early 3-pointer
Tech went on an 8-0 run to take a 20-15 lead with baskets from Obanor, Warren, Shannon and Williams… Tennessee stopped the run with a free throw from Huntley-Hatfield… Obanor started the run with a jumper before Warren slammed down a fastbreak dunk to give Tech a 16-15 lead with 7 minutes remaining in the half
Shannon gave Tech a 23-19 lead with an And One with a tough layup and then a free throw with 4:22 on the clock… He scored again on the next possession to give Tech a 25-20 lead
Obanor pushed Tech’s lead to 28-20 with a 3-pointer with 3:34 to play in the half… Tech was 3-for-7 on 3-pointers after he made the shot to push the lead to eight and he had seven points

Shannon led Tech with 11 points and five rebounds at halftime where he was 4-for-6 from the field and 3 of 3 at the free-throw line. Obanor added seven points, while Warren and Williams had five points each. McCullar was held scoreless through 20 minutes but led the team with three assists and had five rebounds. Tech was 11-for-29 from the field (37.9 percent) and 3-for-11 on 3-pointers going into the break. The Red Raiders owned a 21-16 rebounding advantage, including a 6-3 margin in offensive rebounds. Tennessee was limited to 10-for-28 from the field (36 percent) and were only 2-for-13 on 3-pointers. Zeigler led Tennessee with seven points, while Fulkerson had six points.