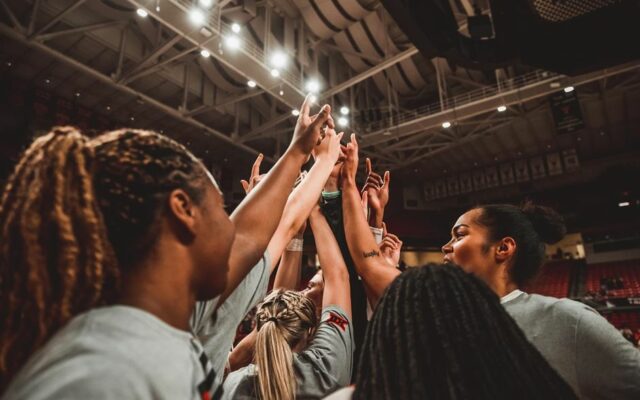 Despite outscoring ODU 31-22 in the second half, the Lady Raiders fell for the first time in 2021-22

KATY, Texas — Despite cutting a once 27-point deficit to just eight with 6:18 left, the Texas Tech Lady Raiders fell to the Old Dominion Monarchs 59-45 Saturday afternoon at the Merrell Center.

The difference in the contest was the second period of action where the Lady Raiders (5-1) were outscored 22-4.

Senior Lexy Hightower was Tech’s leading scorer, contributing 13 points on 4-of-8 shooting. Hightower hit the lone Lady Raider triple, as the potent Old Dominion (4-2) defense held Tech to just 1-of-10 shooting from behind the arc and a season-low 45 points.

In the decisive second quarter, Tech scored four of the first nine points to trail just 20-13 with 6:08 left.

Then the shots stopped falling.

Led by Hightower and Khadija Faye, Tech answered the ODU run with a 15-2 outburst over the next seven minutes that cut the difference on the scoreboard to just 14 (47-33) with just under 90 seconds left in the third.

ODU scored the only other basket the rest of the period, giving the Monarchs a 49-33 lead at the end of three.

On the ensuing ODU possession, Aziah Hudson nailed a three that sparked one last 8-0 run that gave ODU a commanding 57-41 lead with 4:43 to play, before holding on for the 59-45 victory.

“Our kids played hard in the second half, but we cannot come out timid and fall behind by as much as we did in the first half. Our kids battled back in the second half, and we tried everything we could, but the deficit was just too much. We didn’t rebound the basketball very well at all. We weren’t very tough with it and had a hard time running our offense because we couldn’t make clean passes or move the ball. They were the tougher team in the second quarter. We’ve used a lot of energy and effort the last two nights so we’re going to have to certainly get our feet back under us and recover. We need make sure we’re prepared to play another game on the third day. We knew this was going to be a difficult challenge, and a difficult tournament, and it certainly has been that. But we’re learning a lot about ourselves, and we’re figuring some things out.”

• Lexy Hightower’s 13 were the most by a Lady Raider tonight.
• The double-figure scoring game was her third consecutive and the fifth in six games.
• Faye scored five points (all free throws) and had four rebounds in 17 minutes.
• Freshman Rhyle McKinney managed to score six. She failed to score in double figures for the first time in her Tech career.
• Hightower was the only Tech player in double-figures.
• The Lady Raiders allowed 14 offensive rebounds Saturday.
• Tech managed a season-low four assists and turned the ball over 17 times.